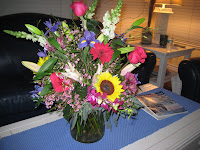 I almost titled this post the MISERY of Marriage, but far be it from me to make such an off color and possibly misunderstood comment (Insert smiley face here!)

Truth be known, I have walked through both! The Misery and the Ministry of Marriage.
My honey and I have been married for 32 years this month.
This was my Anniversary bouquet. It was a wonderful surprise, maybe even shock.
My husband is VERY generous. He is always giving me unexpected and wonderful gifts but he does not do flowers!!
They were more than an Anniversary gift however.
They were a peace offering, a fancy olive branch of sorts.
Not only was honey out of town for the entire week of our anniversary, but he left me at home with a nasty flu and feeling as sick as I can remember in many, many years.
I woke up the morning before our big day, all alone, burning with fever, only to find that one of our doggies had done a very bad thing in her doggie bed during the night.
My mouth was open to call out to my man to come and clean things up, only to remember that I was…HOME ALONE……..on my anniversary…..sick!
I did the duty but I was NOT a happy girl. (Insert sad face here)
Later that night, honey called to check in on me, as soon as I heard his voice I began to whine and commiserate about my day….about the doggie mess, how sick I was, reminding him that it is our anniversary tomorrow.
I mean girls, I was going to town in full diatribe. Don’t act like you don’t know what I mean.
For goodness sakes, I had a FEVER!
Just about the time I was stopping to blow my nose I heard a mans’ voice speak my name!
Alas, it was NOT my husband, it was his NEW business Associate!!!!
SHOCK! PANIC! HORROR!!!!
My darling husband of 32 years, had me on SPEAKER PHONE!!!!! !!!!!!!!!!!!!!
He was in the car with this practical stranger, driving to dinner, when he called to check in on me!
Now you all know exactly what I did.
In my sweetest voice I greeted the gentleman, asked how their day had been, how his wife was, the kids……then I sweetly told my husband goodbye. I would talk with him later. (Insert fake sweetness here)
I hung up the phone and crumbled onto the floor in humiliation.
My man called later, I did not answer.
He called later, I did not answer.
He called later still, I did not answer.
He called later, again. Yep, you guessed it.
Finally, at about midnight, he called again.
I picked up the phone and in the Fake Sweet Voice mentioned above, I said..
“Honey, am I on speaker phone?”
“No” he sweetly sheepishly responded.
“GOOD!!! #@$#%&%$@+ (Insert naughty words here)” I said and hung up really hard.
The next day was our 32Nd Anniversary.
The Fever was gone. The dog was clean. My heart did what it always does when we have a fight.
The doorbell rang and this beautiful arrangement was placed in my hands.
The delivery guy ran away really fast before I could even tip him.
I think my man warned him that the Wife was Hostile! Drop the goods and get out of Dodge!
I love him so.
We have learned so much over those years. We have learned about the hysterical differences between men and women.
We have learned that this too shall pass. That, if you are lucky, tomorrow is a new opportunity to get it right, but that it is oh, so much better to get it right today!
We have learned to say:
“I’m Sorry”
“I Forgive you”,
“Thank you”
“You did a great Job”
“I will do that for you”
“You can do it”
“Let’s talk about it tomorrow”
“Let’s never talk about this again”
And most importantly…”Hi Honey, I have you on speaker phone” (Insert love here)
We have learned ministry together!
Praise God!!
ps….a few days later, he came home with this…

just in case it was a bad day!
(You know, once you get them trained, it’s not so bad)
Share this...