I’m thinking Martha Stewart here, not Martha of the Bible.

I have really always wanted to be more like Mary of the Bible, the one who sat at the feet of Jesus as opposed to Martha, the one who was too busy to “Linger”.

On the same note, I really don’t want to be Martha Stewart either, seeing that she has a prison record and all.

The truth is, I was just making a feeble attempt at an eloquent or at best, catchy, title for a little craft project that I did over the weekend and thought to myself…

Self…I’ll bet some other women would like to try this easy organizing thingy (Do you believe I spell checked this and it is a word!) so that they, like me, would have a few extra minutes to sit at the feet of Jesus instead of untangling necklaces and scarfs while looking for just the perfect accessory for the outfit I am wearing. 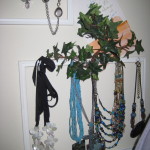 It’s a picture frame, 3 of them actually, all on sale at Target. I knocked the insides out and strategically placed a few white screw hooks at the tops and had myself a cute wall hanging that is filled with my necklaces. The card tucked in amongst the fake ivy for extra style, is my 34 year Anniversary card that plays “I Swear by the Moon and the Stars I’ll be There” by John Michael Montgomery. 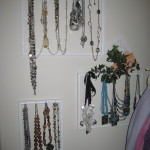 The next Martha Mag worthy step I took was to use a 19.99 art easel to display my scarves and belts. I have a 5.00 scarf hanger to help out with spaces for scarves hanging from the top of the easel. This so beats having them wadded up in a drawer with my running socks. 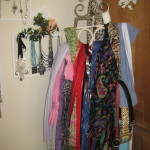 Done. 30 minutes. Easy to find and untangled scarves, belts and necklaces. It really looks quite cute tucked in a corner next to my honey’s armoior. Now that is a Martha Steward word…Armoior. 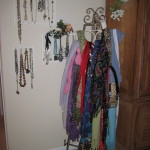 I guess since Monday is almost over, I could have posted this tomorrow, and called it “Totally Silly Information Tuesday” but I am saving that one for another day.