It was a James Bond moment.

Jesus, with his head tucked into his tunic so that no one would recognize him, hugged the dark street corners until his hand landed on a doorknob. Hoping nobody was home, he tried to sneak quietly into a strangers’ house on a strange road. He was exhausted and desperate to grab a moment of peace and quiet. He needed a rest from having some sick or needy person tugging on his tunic or grabbing hold of his feet. He was surely at the end of his grace rope after having just been rejected in his own hometown; organizing his leadership team; serving dinner with no denarii to 5,000 hungry people followed by a stormy after-dinner stroll across wind tossed waves to rescue a bunch of freaked out leaders.

When we let our minds take creative freedom and actually imagine all of this activity we get a good idea of the “MAN MOOD” Jesus was probably in.

Rest was not to come. He slipped quietly into the dark house and IMMEDIATELY found himself face to face with another demanding woman with another demon possessed daughter.

The woman was not even in her own house! Jesus had finally found a nice dark house to hide out in and this woman was hiding there waiting for him. She knew where to find Him.

She was groveling at his feet before he had time to find the chips and dip and turn on the basketball game. (Oopps sorry, I lost my train of imagination, that was MY MAN I was thinking about)

Back to the story.

He was barely in the door and had not even found a couch to stretch out on, when he had a desperate woman falling at his feet screaming “My DAUGHTER HAS A DEMON! Heal her!”

I must admit that as the mom of a daughter, who has been a teenager, I have been tempted to voice those very thoughts before. I am CERTAIN my own mother did!!

What Jesus says to her blows my mind.

It is shocking really.

Every single time I read those words I cringe. Oh my. Did He just say that? My Jesus. My Gentle, kind, compassionate Jesus? The lover of my soul? Did He actually call that hysterical Mama a DOG?

When I read this passage my first thought is that He must have done what I so often do, and say something that I wish I could take back as soon as the words slip through my lips but it’s not true.

Jesus called her a “Dog” and he meant to.

I reread that story this morning, taking the time to let God create that moment in my minds-eye. Watching the scene while knowing the character of Jesus. I got a fresh look at the intent of our Savior. God’s Word spoke to my heart. I saw Jesus’ goal in a fresh way.

Jesus, by this shocking comment forced this woman to speak truth. He forced her to see and speak her rights. He drew her from position of begging to her position of claiming. From defeat to victory. From helpless to hopefull.

It is almost as if He is challenging her—

You don’t deserve anything right?

Have you ever felt that way? I know I have.

Once the woman got out of her whiny beg, she stood up and faced her Lord and staked her claim. Once she knew in her heart that Jesus could and would meet her need, she found victory.

She was persistent. And that DOG WILL HUNT! 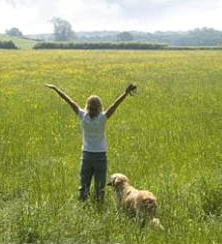 She went home and found her daughter lying in her own bed and the demon was gone. That was one happy Mama and it was her now faith that made it happen!

This story spoke to me today how about you?

Got any demons in your life that need to be destroyed by your humility: your specific request: your persistence.

I definitely do and I know where to find Jesus!