JOIN MY NEWSLETTER TO RECEIVE FREE GIFTS! SIGN UP HERE!
Guest Post by Mary DeMuth
I am tickled pink, in fact honored, to have the words of a VERY special writer on the pages of my blog today. I met Mary DeMuth at The Proverbs 31 Ministries “She Speaks” Conference a few years ago and have followed her writing and coaching ministry since then. She has rescued and inspired me personally on several occasions with her wisdom and experience, which she shares gently and generously. Mary has one of my favorite websites where she describes herself as: a worshiper, wife, mom, author, speaker, home chef, gardener, and sometimes triathlete who loves to see God turn trials into triumph. She and I have all of that in common–except the triathlete part 🙂 as well as a passion for seeing the hearts of women restored and released to be the beautiful daughters of God they were born to be. Mary has written numerous books both Fiction and Non-Fiction including her touching memoir called Thin Places. I will be gifting a copy during my end of the month drawing! Please visit her website linked below and tell her I sent you! Enjoy. 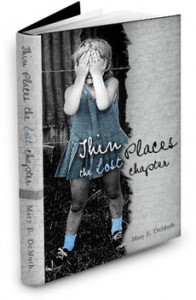 I had some significant, deep healing after reading Walter Wangerin’s The Book of the Dun Cow. I realized, through an interesting interchange in the book, that I’d been masking God by my own pain, projecting my own warped perspective on Him. I wrote the part of a chapter (of a book that never got published) about its affect on me:

Many of us view God as if he wears a disguise—a costume that looks like all our pain and fear and worry woven together. When we see him, we see our experience. Those who have happy lives tend to view God joyfully, as a Father who takes great care of his children. Those who live difficult lives tend to view God skeptically, intellectually knowing he is good, but not truly embracing his goodness.

Pertelote, a young hen in Walter Wangerin’s award-winning book The Book of the Dun Cow, had the latter experience. Bent under the tyranny of Cockatrice, a rooster who ruled with an iron beak, Pertelote recoiled in his presence. Half gray-scaled snake, half rooster, Cockatrice was the poultry world’s Hitler. One day, Pertelote escaped Cockatrice’s domain, but her pain and fear still resided within her. She made her way down river, tattered and worn out. There, across from her, stood another rooster, Chauntecleer.

Chauntecleer, a kind rooster, had been wading through mud, graying his lower feathers. He did not know it, but the dried mud made him resemble the evil-scaled Cockatrice.

When Pertelote spied him, she screamed. She thought he was Cockatrice, coming back to torture her.

Later, when Pertelote was safe within Chauntecleer’s kingdom, she agreed to marry him. Before they were married, Chauntecleer was troubled afresh by her first reaction to him at the river.

“My beautiful Pertelote,” he asked, “are you afraid of me?”

He puzzled over her response. “But there was a time . . . when you were afraid of me, isn’t that so?”

Again she said no.

Again she said no.

By now, he was really confused. “But you screamed at me!”

“Yes I screamed at you,” she said.

Eventually, Pertelote shared that she thought he had been the evil Cockatrice. “Chauntecleer, what I thought I saw in you was not there. What I saw I should not have seen. My seeing was not true: The thing was not there, nor could it ever be there in you. I know that. My imagination made me afraid.”

We are a lot like Pertelote. When we see God, his goodness is masked by the pain of our past. We assign his muddiness to scales. We scream in fear because we cannot conceive of God as being for us. Many of us fail to risk because we cling to an inaccurate view of God. He’s wearing the distressing disguise of our pain. We project on him our humanness. We misunderstand him.

…
If you’d like to learn everything I know about traditional publishing and you only have a few bucks to spare, consider purchasing my $2.99 ebook, The 11 Secrets of Getting Published.

Leave Mary a Blessing In the Comments Below  and capture a chance to win her book THEN be sure to visit her in cyber world.