This post is a little long but, HONESTLY you won’t believe this story!

This is a picture that I snapped in the Atlanta airport on Friday while running with all of my heart from Delta airside terminals to the Thrifty rental car area. 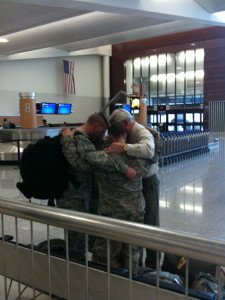 My day had been a virtual “run” through the dark side since I rolled out of bed at 5am.

At this particular moment I was running from one side of Hartsfield International Airport in Atlanta to the other, worried about the possibility of being late or even missing a speaking engagement that I had been dreaming of and praying about for over a year…

THIS captured my attention…As I watched this Pastor pray for these soldiers who were obviously leaving for a destination far more pressing than mine, God got my attention!!

It had not been easy to do up to that point…..

As I shared yesterday, and probably way too much over the past few weeks (sorry) this past weekend was my first “Imagine Me..Set Free” Woman’s Conference. It was being held in Asheville, NC at The (BEAUTIFUL) “Cove” Conference Center. Nothing like the environment these soldiers were surely facing.

I had 3 girlfriends along and our plane was set to leave Tampa at 8:30 am and arrive in Asheville after a short plane change in Atlanta, at around noon. The stormy wind gusting weather that greeted me at 5 am set my heart alarms off as soon as my eyes first opened. 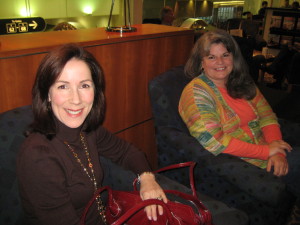 This is two of them at the start of what would turn out to be a day we would NEVER forget. My guess is, it will become one of all of our favorite stories to tell.

As the storm out the airport windows promised, Sure enough our plane out of Tampa left 1 ½ hour late and bumped like a kid jumping on a mattress ALL THE WAY to Atlanta. It then CIRCLED OVER Atlanta in the same bouncing way for an hour until it finally landed at close to 12:00.

We had obviously missed the little puddle jumper connecting flight that was to take us from Atlanta to Asheville.

After me and my airplane buddies stopped kissing the ground upon finally landing in Atlanta, our gut response was to RENT a car and DRIVE the 3 ½ hours to Asheville.

It was during our hike across this 500-MILE airport (OK maybe not 500) that we saw the sobering soldier scene above.

God said, “Be Anxious For Nothing”!!!

We left the airport terminal, hiked our way to the rental car agency and were just about to hand over our credit card when our cell phone rang. DELTA was going to get us on the next flight out at 2pm. We did the math, figured that was the faster way to get to our destination, hiked BACK the 500 miles (OK maybe not 500),

BACK through security and back to the DELTA gates ONLY TO DISCOVER…. ANOTHER cancelled flight!!!!!!!

The next flight was to be 3pm. We waited. Until it too was…. Cancelled!

We bowed and prayed in front of the entire terminal filled with anxious and waiting people!!!!

Finally at 7 pm, we walked out into the rain to get on tiny little airplane commuter flight into Ashville. Exhausted.

The four of us settled into the front row of the 30 seat airplane knowing that we were going to be VERY late for my KEYNOTE kickoff at 7:30.

After the airplane door was closed and we were all buckled in, the pilot’s door flew open and the pilot (Who might have been MICKEY MOUSE based upon his leadership skills) announced that “due to the EXTRA FUEL NEEDED FOR THE STORMY WEATHER” the airplane was—SHOCKER—OVERWEIGHT!!! The “captain” advised us that they would have to dump some luggage a passenger or two in order to get off the ground.

The airplane door flew back open and rain began to blow into the galley.

Golly, you would think they might do this airplane “get off the ground weight math” ahead of time but who am I to question?

As a matter of fact all I could think about was the BOX of WHOPPERS that I had confessed to eating on Face book the night before our flight. I tried not to make eye contact with the flight attendant so he wouldn’t call me out in front of my friends.

The “Pilot” came back on the speaker…

“Due to the EXTRA FUEL THEY HAVE TO CARRY FOR THE STORMY WEATHER and the EXTRA WEIGHT they had to dump to get to the right weight that it takes to take off…the nose of the plane was a bit heavier than the rest of the plane.

More weight had to go from the back of the plane. To create balance ya know.

Off went a 90-pound Grandma who was apparently the last one on. WHEW…. another Whopper spare for me!!!

FINALLY, the airplane door closed again and we started to slowly taxi away. As we did I casually glanced across my friend seated next to me and spotted MY LUGGAGE piled on top of a pile of luggage…

In the POURING Rain…

That was Friday night.

This is MONDAY night and I still do not have my luggage.

We arrived at 8:30 pm to the Cove…in the clothes and shoes that we had been in for 14 hours…. to receive a standing ovation from the precious ladies of Mecklenburg Community Church. It was the easiest standing ovation I have ever gotten and will probably ever get again.

What followed for the next 3 days was beyond anything we could have IMAGINED!

Since this post is 2x”s what Michael Hyatt tells me it should be, stay tuned for PART 3!! It’s the best!!!