Good Morning World! Yes, I know, it is waayyy into the morning in many places. I am bit bit slow this morning but Hello Fresh Word Friday.

The word for today is AUSTERE!!! WhoooHooo!

I am sitting in front of a waterfall that is located inside of a building under a sky clear dome. Not exactly the mountains but a nice sound and a pretty garden. It is raining over the dome but no rain on my balcony. Oh the magic of an amazing architect.

I am presenting “Surrendering the Secret” at the American Association of Christian Counselors in Nashville, Tenn which is located in the Opreyland Hotel. There is a definite style statement in this place and it involves boots, hats and things that sparkle! Even for those who are here from Miami!! It is fun to watch a convertible tan in cowgirl boots!

My “Prayer Chair” today is a 3 piece wrought iron balcony set, one chair providing a stool for my still tired feet, the other my tired, well…you know, and the little table for my coffee, Bible and notebook. It is a nice little spot don’t you think? 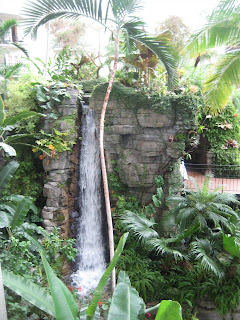 I am in Matthew Chapter 3 of the Message. You ladies may be WAYYY past me now since I have not had much time to collect my thoughts, much less sit and write them in days. The difference between a prayer journal and a laptop is the need for a somewhat “insightful” blog post verses a bunch of words on a page that no one else will see.

Oh well, maybe it is not THAT different, so here goes….

I was actually cracking up laughing on my balcony this morning as I read this chapter.

The first few words of Matthew Chapter 3 tell us that John, called “The Baptizer” was preaching in the Judean desert announcing the passion of his heart—
“Change Your lives People!!! God is Watching”.
The word goes on to say that John’s showing up had been predicted long before he started preaching in his oh so needy wardrobe (He would have stood out like a sore thumb at the Opreyland Hotel!).
John had been referred to as “Thunder in the desert”! I can sometimes relate but honestly, to think of John as a preacher today would make some snake skin crawl!

As scripture clearly shows in this Chapter, John did come and he did create some THUNDER!!

He was preaching his heart out by the side of a lake, when some people showed up that he perceived as false and hypocritical. I have had those feeling before and just tried to ignore them. But not John, he just called a Snake a Snake and no pretty words are anywhere to be found.

I am absolutely certain than even though I have felt these things, even within the past few days, I would never have the courage to speak them out, nor would any editor I have ever worked with, allow them to show up on the published page!

These are John’s “nice Christian words”……in fact my Bible says “He Exploded”!!

He called them a Brood of Snakes!

The people who came to his Bible Study!!
Can you imagine!!
The people who were presenting themselves as Christians but were really just trying to be popular, or follow the crowd, or check out the action, or BE in the action!! These folks would do anything, say anything or be anything just to get SOMETHING.

“What do you think SLITHERING down here to the River, the Church! The Holy Place of Surrender!” were his words of greeting.

What counts is your LIFE, is it green and blossoming???

Be certain that all that you are pursing is KINGDOM LIFE!!!
When you do, God Himself will IGNITE a fire in you that no man or woman can put out, it will burn no matter who is around, who sees you, who approves or who joins you!
That is how you know it is God!

I leave this chapter, for now, with many things on my heart.

If I had walked into John’s crowd, today, would I be in that group in ANY way???

Would any part of my focus, my heart or my life be able to be grouped with “The Snakes”???
Would I be more interested in
the Surroundings or the Saviour?
Men or the Master?
Tickled ears and a fun day at the lake or Truth?

Secondly, are the words of my life, my teaching and my ministry….SIMPLE and when they need to be…

can I be AUSTERE when it is called for??? Or does popularity, Christianese, fitting in, being liked, being accepted….trump that truth?
“Austere”, a word to ponder don’t you think??
Share this...